Many of us have heard of the traditional board game Yahtzee where you roll dice, but Yahtzee has also been made into one of the lesser known axe throwing games. Even though it may not be as well known, Yahtzee is one of the most fun games you can play at an axe throwing venue, and it is designed for teams which makes it perfect for large groups.

Start by assigning 4 people per team. Once the teams are set, each team will take turns completing a set of 6 tasks. On each task, each player gets 3 chances to complete their role for the task. Ideally all 4 players on the team will be throwing at the same time. Once each task is complete, it is the next team’s turn. The winner is the team that gets the highest score during their turn. Check out this video explanation.

Each player has an individual goal for each task, and you get 3 attempts to achieve the goal. All players will throw at the same time; if you hit your target then you will stop throwing until the team moves on to the next task. All players must hit their goal within their 3 attempts for the team to complete the task and be awarded points. If any player misses their 3 attempts, then the team gets 0 points for that task.

Here are the tasks:

Your team is awarded a certain amount of points when they successfully complete a task. If any single player does not hit their target within 3 attempts then the team will not be awarded any points for that task.

Here are the point allocations for each task:

Let’s say Albert, Bonnie, Clyde, and Dale are on a team. Their first task is to each score a “1”. They each get it on their first try except for Albert who gets it on his second try. The team is awarded 100 points for completing the task, but is then deducted 10 points for Albert’s miss. So their score after Task 1 is 90 points.

Now they must each score a “3”. Albert and Bonnie get it on their first try, Clyde gets it on his second try, and Dale misses all 3 attempts. Since Dale failed to hit his target, the team is awarded 0 points and they are deducted 40 points (1 miss from Clyde and 3 misses from Dale). The team’s score is now 50 points (90 – 40 = 50).

Now they must each score a “5”. Each player hits their target on the first attempt. So they are awarded 500 points with no deduction. Their score is now 550 points.

Now the team must score a straight. They declare before they start that Albert is going for a “1”, Bonnie is going for a “3”, Clyde is going for a “5”, and Dale is going for a “7”. This time, Bonnie, Clyde and Dale all miss all 3 of their attempts while Albert got it on his second try. The team is awarded no points and is deducted 100 points (10 total misses). This brings the team’s overall score down to 1030.

The team is now on their final task where they must each score a “7”. Albert and Bonnie hit their target on the first try, Dale hits it on his second try, and Clyde misses all 3 attempts. Since Clyde missed all 3 attempts the team does not get any points, and they are deducted 40 points (4 total misses). So their final score is 990 points.

There is an extra rule used in competition, but that we treat as optional.

This rule ONLY applies to the final task where each player is going for clutch. If and only if 3 players hit their target and the last player misses his or her 3 attempts, then that last player will get a 4th attempt. If the 4th attempt is successful, then the team will be awarded 750 points (instead of 1000) for completing the task with an extra attempt taken.

So in our previous example on the final task, if Clyde had successfully hit his target on the 4th attempt, then the team would have been awarded 750 points and still deducted 40 points, making their final score 1740. If Clyde had missed the 4th attempt, then there would have been a 50 point deduction making their final score 980 points.

You can watch a Yahtzee axe throwing event held at the 2019 Urban Open HERE. 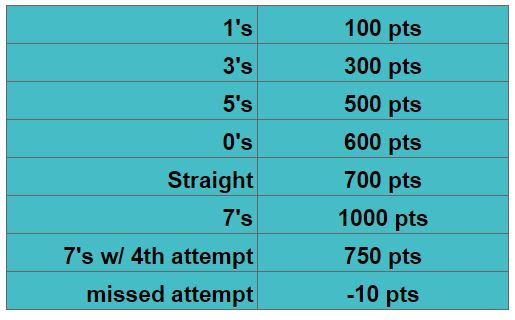