Top Axe Throwing Games and How To Play

There are a lot of reasons why axe throwing is such an enjoyable activity. Anyone, from a beginner to an expert, will have fun in this sport, which is why it’s a great way to bring people together.

At Axe Thro Co, you will get to play the original backyard sport of axe throwing, as defined by the IATF. But you also have the option to play a large variety of other games that work great with an axe and a target, perfect for any group event!

Before jumping into how each game works, let’s quickly overview the target. This is an example of a typical IATF axe throwing target: 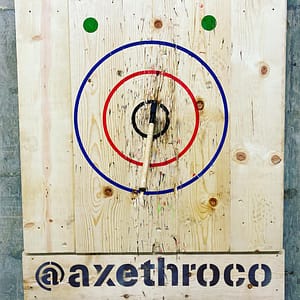 When you stick your axe in the center circle with black paint, that is called a bull’s eye and is usually worth 5 points. In the red (outside the black) is 3, in the blue (outside the red) is 1. The green dots toward the top of the target are called “clutch” and are usually worth 7 points. If the axe sticks anywhere outside any of these circles, that would be a “0”, and if the axe doesn’t stick it is considered a “drop”.

Cricket can be played either 1 on 1 or in teams. The goal is to hit each area on the target 3 times, and the first team to do so wins.

Typically, the areas you need to hit are “0”, “1”, “3”, and “bull’s eye”. Every time you hit one of these areas, your team gets a mark next to the corresponding value on the scoreboard. Once you have 3 marks next to a value, that area of the target will no longer count for anything if you hit it again.

If you want a shorter version, you can take away the “0” from the predetermined areas needed to hit. Or you can add a challenge by adding in the “clutch”.

If you miss, you do not have to start over. You will stay where you are in the sequence.

21 can be played 1 on 1 or in teams. As you might expect, the first team to 21 points wins the game. However, there are a few other rules to make it more interesting.

First, you need to hit 21 exactly. If you go over, then the last throw will not count. For example, if you have 20 points and hit a bull’s eye, your score will remain at 20.

Also, you will set 3 predetermined numbers that you will need to hit along the way to 21. The players can take turns choosing these numbers before the game starts. Let’s say 6, 10, and 14 are chosen. Your team will need to get your score to exactly 6 points before moving on to 10, and so on until you get to 21. So if you have 5 points and hit a “3”, your score will remain at 5.

To make the game go quicker, you can also choose just 1 or 2 numbers that need to be hit on the way to 21.

Blackjack is another game that can be played 1 on 1 or in teams, and involves a target of 21 points. Each team gets a total of 10 throws, and the team closest to 21 after 10 throws wins. However, if at any point during the game your team goes over 21, then you have now busted and are immediately eliminated.

The scoring is also slightly different for 2 reasons. Normally the area you hit is considered to be where the majority of the axe is embedded in the wood, but in Blackjack your axe must be 100% within a particular scoring zone, otherwise you get 0. For example, if your axe is stuck with part of the blade in the red circle, and part of it outside the red circle going into the blue area, then that throw would be worth 0 points.

The other difference is that if you drop your axe, then that throw is worth negative 4 points. So if you get to 21 before the 10 throws are completed, then you will need to continue sticking your axe in the “0” area to stay at 21.

Landmines can be played 1 on 1 or in teams. The first team to pass 50 points wins. However, there are “landmines” every 10 points, and if you hit a landmine then your team’s score goes down 10 points. So if you have 17 points and you hit a “3” to put your score at 20, you would then go back down to 10.

Yahtzee must be played in teams of 4 people per team. It is one of the most fun games that can be played at an axe throwing facility. The only downsides are you need a decent size group of people in order to play, and the rules are a little more complicated than most other games. So we’ve got a whole other article explaining how the game works HERE.

With a lot of these games, you can also play several other variations. There are other games you can play as well, but the ones listed here are some of our favorites. If you have any questions, please feel free to give us a call. If you’re in San Diego and are particularly interested in any of these games, come on in and let us know what games you want to try.